The words ‘selvedge denim’ relate to the ‘self-edge’ of fabric.

In terms of denim jeans, the selvedge is used in the jean construction, specifically along the seam that runs down the outside of the jean (from waistband to hem). 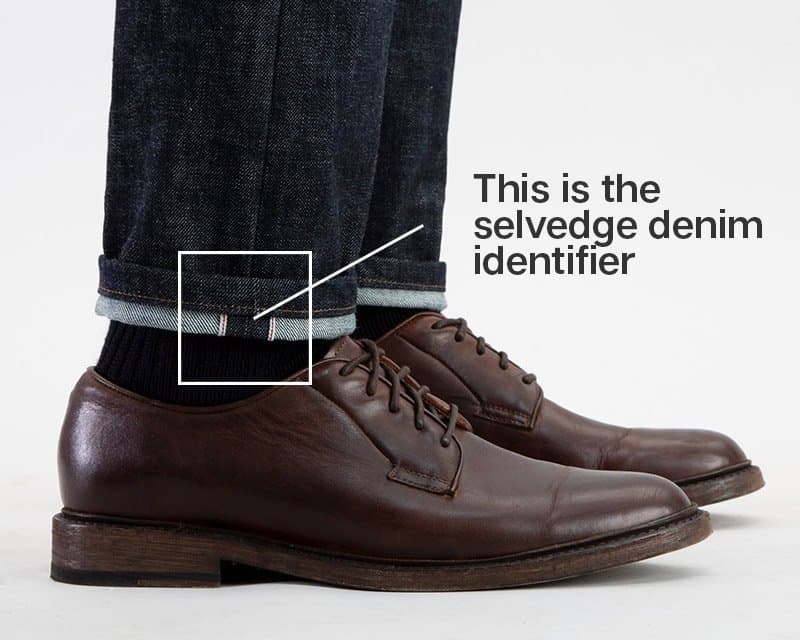 Selvedge denim is woven using old-fashioned denim-weaving techniques; most authentically woven on old looms. See finished selvedge jeans. Selvedge looms were popular in denim weaving until the mid-to-late 1900’s. US denim mills began modernizing their machinery to speed production as demand for denim grew world-wide. For these mills, that were focused more and more on increasing output, the use of old selvedge looms became unwanted, making the looms obsolete due to their slower and less consistent production. 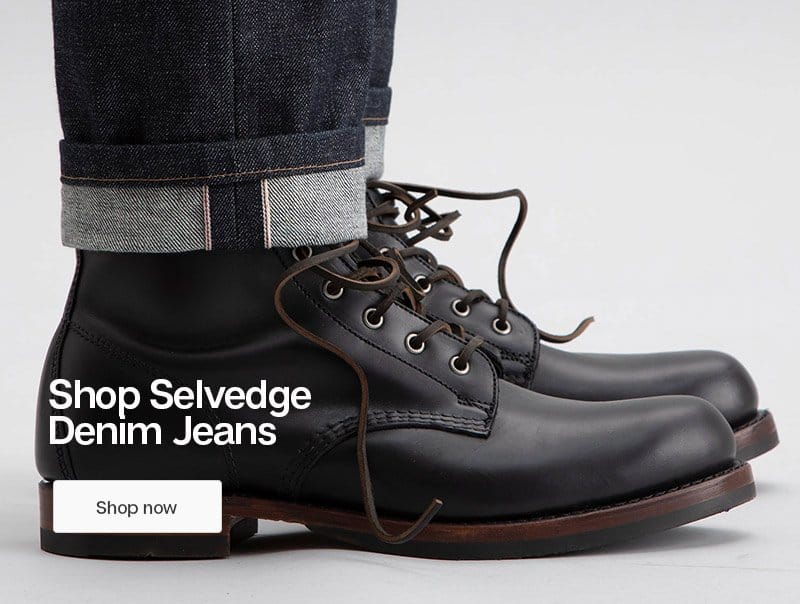 However, today, selvedge has become more desirable than non-selvedge for two reasons: the nuance of the denim weaving technique itself and the commitment to quality from the mills producing selvedge denim. Japanese mills are the unquestionable leaders in selvedge production, nowadays.

Selvedge tends to have a tighter, denser weave than non-selvedge. The higher density gives the denim a sturdier hand. The use of the older selvedge loom technology also creates variations on the denim surface (due to inconsistencies in the weaving process) compared to denim woven on modern looms. These variations make the denim visually unique and highly desirable.

Denim mills that have committed to the production of selvedge understand and value the nuance and history of denim. With their advanced knowledge comes a desire, as well as a self-imposed responsibility to make a superior product. For these mills, yarn quality, dyeing techniques, quality control, design and innovation take heightened priority as compared to mills focused on commodity, high-volume production. The result is an undeniable increase of the overall quality of selvedge. 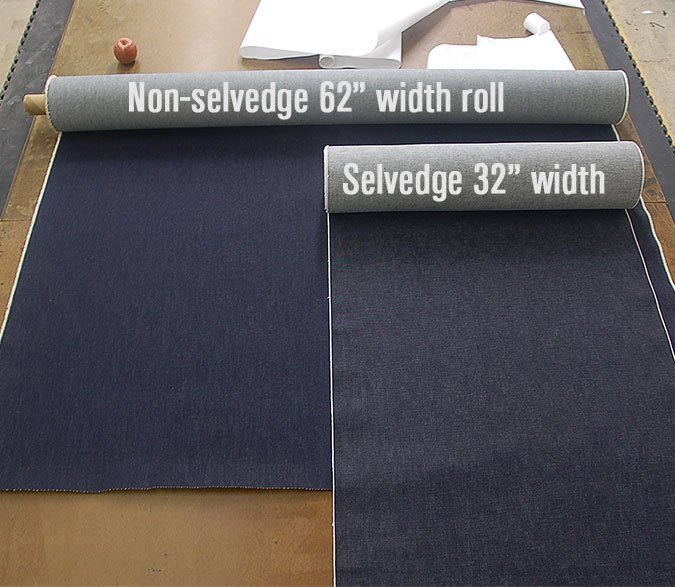 The word selvedge comes from “self-edge.” The edge of the denim has a clean finish, since it will not unravel, the edge of the fabric is used as the garment’s outseam. Therefore, looking at the inside of the outseam, is an easy way to identify a pair of jeans made from selvedge.

There are variant spellings of the term: selvedge or selvage. Both are grammatically correct. The brand prefers using the former in its product titles and description, because of its direct reference to the root word “edge.” 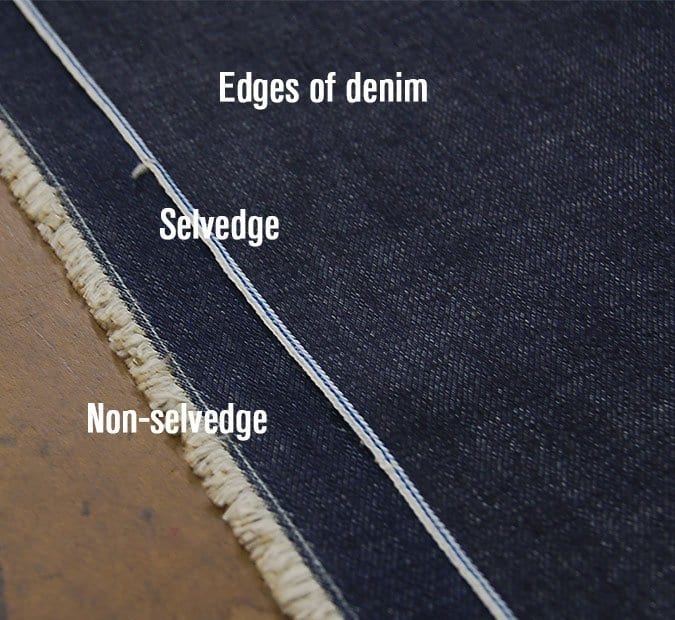 The denim edge is used in the jean construction. The outseam of the jean is the self-edge of the denim fabric – and is the identifier of selvedge.

As the above photograph reveals, the selvedge has the white edge with blue thread. This is the “self-edge” of the denim. A non-selvedge jean will need a merrow stitch (or cleaning stitch) on this edge to keep the denim from unraveling. 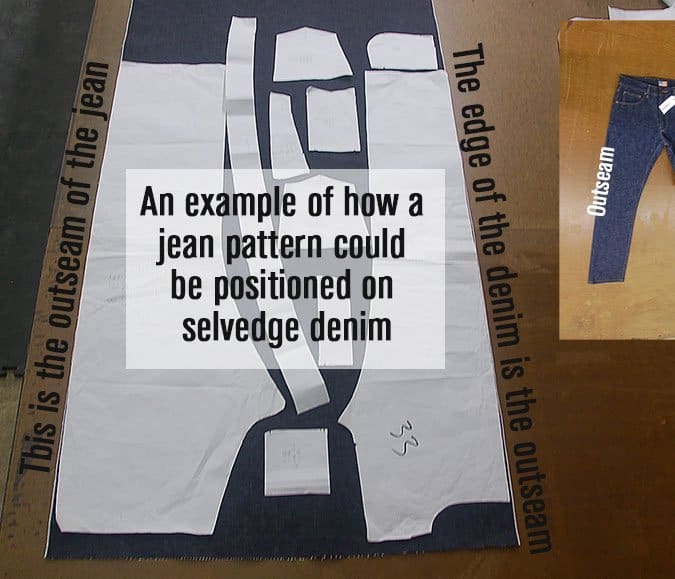 The above picture shows how to place a jean pattern onto selvedge before cutting. This clarifies the use of “self-edge.” Selvedge is more narrow than non-selvedge. Fully using the “self-edges” minimizes fabric waste. (As seen in the first photograph of this article). 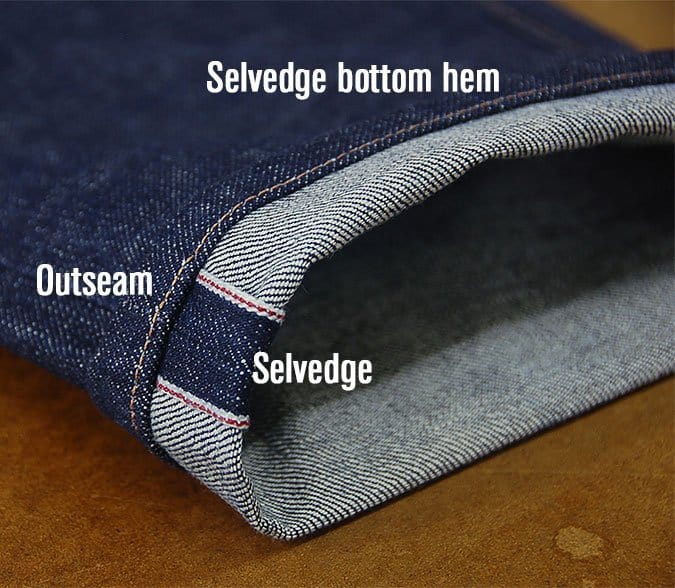 This illustrates the most common identifier of a selvedge jean. 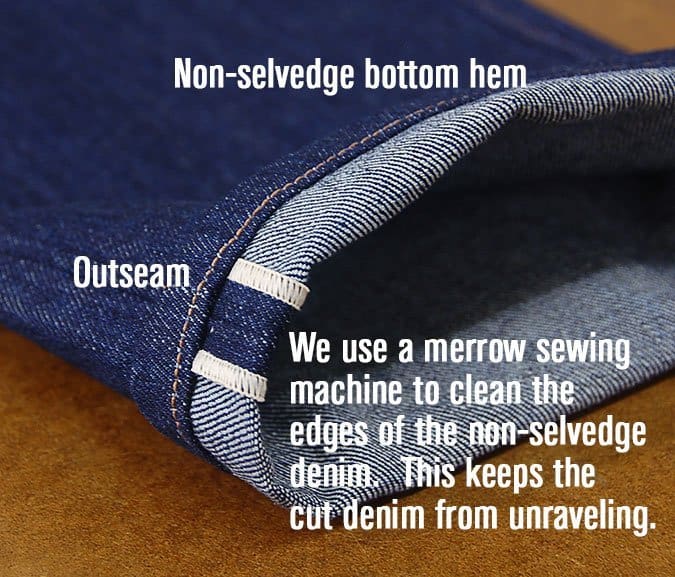 Non-selvedge jeans require a cleaning stitch to keep the outseam from unraveling.

Selvedge is not the same as raw denim. Raw denim has never been washed. Therefore, all denim – selvedge or non-selvedge – is raw when it comes out of the loom. Washed denim is no longer raw.

There may be many questions concerning the differences between selvedge and non-selvedge. One denim is not superior to the other in terms of quality and longevity. Moreover, the cotton and the dyeing processes used for selvedge are not necessarily different than those used for non-selvedge. In question of comfort, non-selvedge may offer somewhat more flexibility in fabric. However, selvedge is undeniably more desirable and attractive, and the Todd Shelton brand recommends highly and truly the purchase of selvedge jeans.